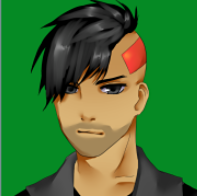 Kris is a retired army soldier, skilled in hand-to-hand combat.  He left when he began to disagree with the Central Government's methods.  Because of his training in the army, Kris has a lot of experience with fighting and warfare.  Despite his large, bulky physical experience, Kris has a sense of humor and likes to crack jokes every once in a while. Timmy likes to make fun of Kris because Timmy demolishes Kris when they play FPS games.  The tattoo on the side of the tattoo was received after he left the army, but the reason he got it is unknown.

Retrieved from "https://codeseries.fandom.com/wiki/Kris_Hayes?oldid=4196"
Community content is available under CC-BY-SA unless otherwise noted.