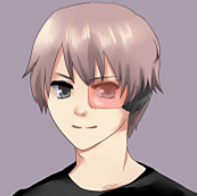 The youngest of members in Free Wired and still a teenager, Timmy is sarcastic and moody. He generally keeps to himself, occasionally throwing in his two bits. It is unclear as to why he is not in school or if he has already graduated. His role in Free Wired is the team's sniper, so he is only skilled in long range combat. Even without the heightened senses while under Devil's Coal, Timmy is a very talented shot. Timmy cares a lot about his sniper rifle and keeps it in good condition.  Timmy and Kris often play video games together, and Timmy likes to make fun of Kris because he is a lot better than he is at first person shooters.   He claims he learned to shoot from video games, but Timmy seems to have an innate sniping ability.

Physically, Timmy is of average height and skinny.  His hair is scruffy and unkempt.  He is not very strong, but he is fast.  In the chance that he is forced into hand-to-hand combat, Timmy focuses on his quick reflexes and dodging.

The reasons behind Timmy's motivation to join Free Wired are vague. He used to work as a bagger at the local grocery.  He also lived in the same area as Kina, so he knew her prior to Free Wired.  It is possible that Timmy is gang affiliated, as that area is known for its gang presence. The status of his parents are unknown, but it is known that he and his parents did not have a very good relationship.

Timmy takes very good care of his sniper rifle.  After every battle/mission/patrol, Timmy spends a lot of time cleaning and polishing his rifle.

Its design is modeled after the Cobra sniper rifle from Borderlands.  The rifle was sprited by Qualifya, previously known as CYERNAica on YouTube with help from xXKandonXxv.

Kina Altamont: Out of all members in Free Wired, Timmy treats Kina the best.  While he is usually sarcastic and blunt when speaking to others in the group, he tends to act more gentle towards Kina.

Kris Hayes: The two often play video games together.  Timmy makes fun of Kris when he loses, claiming all that "army training was for nothing."

Retrieved from "https://codeseries.fandom.com/wiki/Timmy_McLaren?oldid=4206"
Community content is available under CC-BY-SA unless otherwise noted.