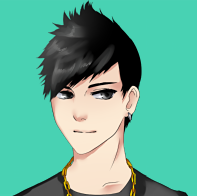 Tyler is a charismatic, flirtatious character in Free Wired. He mostly does reconnaissance for the organization as supervised by Derik. He is known to have many connections in the city and beyond and can talk his way into or out of most things. One of his favorite hangouts is the Vixen Nightclub when he's looking to have a little fun or grab a drink.  He spends a lot of time in the morning make his hair perfect.

His abilities under Devil's Coal are very unique.  For one, his effects due to the drug are activated more of like a threshold effect.  Once he reaches a certain amount of exposure to the drug, the abilities remain even after the drug is expelled out of the body.  Aside from accelerated healing abilities, Tyler has a multitude of medicinal abilities that include pain relievers, cell synthesis, and alleviating or slowing the progression of Devil's Coal addiction/body dependency.  Though Tyler does not have any immediate adverse health effects from consuming Devil's Coal, the use of his powers shortens his lifespan.  This may contirbute to Tyler's party-hard and "seizing the day" lifestyle.

His role in Free Wired could be considered the "group healer" and an information gatherer.  Originally he had to frequently use his abilities on Chase, who had been taking high dosages of Devil's Coal before his death.  He also has frequent sessions with Derik, whose body is struggling with Devil's Coal dependency.

Retrieved from "https://codeseries.fandom.com/wiki/Tyler_Dunne?oldid=4224"
Community content is available under CC-BY-SA unless otherwise noted.